Fragments of evidence - reconstructing the archives of Sheffield's lost buildings 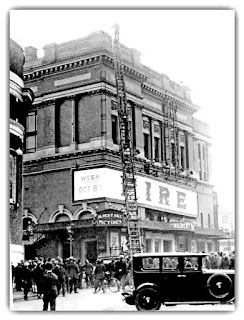 The Albert Hall is one of Sheffield’s lost buildings.  It used to stand in Barker’s Pool on the corner of Burgess Street.  Built to the designs of architects Flockton and Abbott, it opened as a concert hall on 15 December 1873.  The interior was described as ‘opulent, with fine panels, rich tracery carving and intricate designs of cornucopia and Doric columns’.  The hall was used for many different things including concerts, operas, brass band competitions, minstrel and variety shows and magic lantern shows.  Animated pictures were first shown at the Albert Hall in September 1896.  By 1919 it had a proscenium stage and, from around this time, became a picture house with the occasional variety show. 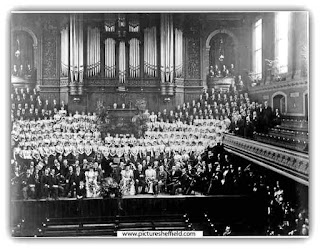 Sadly, on the night of 14 July 1937, following a showing of ‘Black Legion’ starring Humphrey Bogart, a catastrophic fire left the building gutted.  The blackened shell was left standing for a number years, but eventually destroyed.  Some years earlier there had been talk of moving the Albert Hall’s organ into the new City Hall which was being built opposite.  Unfortunately this was not to be as the organ was lost in the fire.  In 1963 Cole Brothers (John Lewis) department store was built on the Albert Hall site.

The old building may be long gone, but there are plenty of surviving photographs and archive documents showing us what the place used to be like.  Of particular interest are some of the earliest plans for the building.  Until recently, these had been inaccessible to researchers owing to the damage caused by the very tight folds in the paper.  Luckily, we were recently awarded a national conservation grant to conserve the city’s historic building plans to make them accessible again.  Included in this project are seven plans relating to the Albert Hall dating back to the 1890s.  Mending these has been tricky affair as Conservator, Antony Oliver notes: ‘oil based tracing papers from the nineteenth century pose a particular problem to the Conservator because of their fragility and as a consequence are highly susceptible to damage when being handled.  These items are currently very tightly folded in badly damaged envelopes.’

First of all, the items must be carefully unfolded prior to conservation treatments. Each plan is then cleaned with a dry chemical sponge to remove surface dirt.  Creases and paper distortion are then relaxed and flattened.  Tears and damaged areas are supported with a re-moistenable tissue.  The adhesive on the tissue is activated using a Japanese water brush.  The conserved plans are then encapsulated in protective polyester sleeves and housed in bespoke four-flap enclosures for storage.  The techniques used in the conservation of these plans will ensure their long term preservation while making them accessible and safe to handle.  We are grateful to the National Manuscripts Conservation Trust (NMCT) for the grant.  The plans are available to view at Sheffield City Archives upon request (ref: CA206/9109). 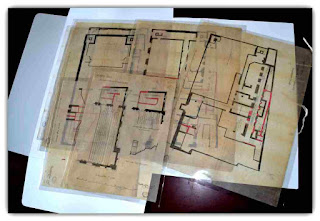 If you’re interested in learning more about the work of the Conservation Unit at Sheffield City Archives don’t miss our two forthcoming events as part of the Off The Shelf festival:


For more pictures of the Albert Hall in its heyday, see Picture Sheffield: http://tinyurl.com/q5c9uwn