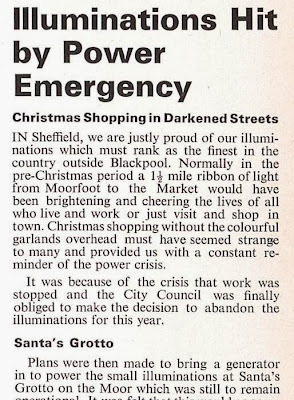 As enjoy this year’s festive lights spare a thought for Sheffielders of 1973.

Due to the energy crisis of that year (high oil prices, power cuts, a three day week and high inflation) the City Council had to pull the plug on the Christmas illuminations.  Everything was in place - 10 miles of cabling and 30,000 bulbs - but they were never switched on. Even plans to bring in an emergency generator to light up Santa’s grotto on the Moor for the children were scuppered after the Government banned their use.