The Sheffield Blitz of 1940

Over the last fortnight we’ve revisited an exhibition held at the Central Library a couple of years ago.  In it, we considered how Sheffield’s rich history had been shaped by conflict and major events in the wider world.

In this last post from the series we look at the Sheffield Blitz.   You can delve deeper by visiting our website and view thousands of images at Picture Sheffield, the city’s depository of over 100,000 local images.

During the Second World War, Sheffield remained a major armaments supplier to the military and as a major industrial city, was targeted by German air raids.  The main attacks took place on the nights of 12/13th and 15/16th December 1940.

On 12th December over 330 German aircraft are believed to have attacked the city. The main industrial area of the city was largely covered that night by a thick fog, but across the city residential areas were bombed including Gleadless, Walkley, Wybourn and Broomhill.  The Moor was also devastated and much of the area around the site of the old castle. 106 out of a total of 154 of the city’s schools were damaged with eight being completely destroyed. 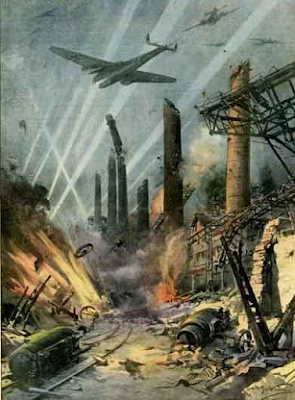 Three nights later the bombers returned. This time the industrial east of the city was bombed hardest; Attercliffe, Grimesthorpe and Burngreave in particular. Brown Bayleys steelworks were hit, as were Hadfield’s Hecla and East Hecla Works, Arthur Lee and other industrial sites.

Almost 700 people were killed during the air raids. Over 82,000 houses of a total stock of 150,000 were damaged. Well known buildings that were badly damaged or destroyed included the Kings Head Hotel, Atkinson’s Department Store, C & A Modes, St Mark’s church, St Vincent’s Roman Catholic Church, the Central Hebrew Synagogue, and Bramall Lane football ground.  Shrapnel damage can be seen on the outside of the City Hall and Central Library and a large crack can been seen across the floor of the library foyer, caused by the impact of nearby bombs. 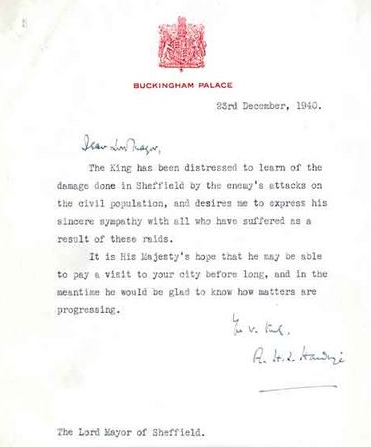 Letter from the King, set to the Lord Mayor of Sheffield in the days after the Sheffield Blitz 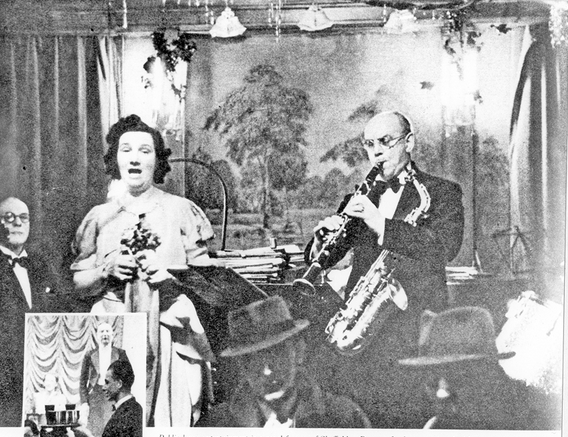 Marples Hotel was a popular destination in the city centre

The single biggest loss of life occurred at the Marples Hotel in the city centre when 70 men, women and children were trapped inside the cellars.  On the corner of Fitzalan Square, Marples was a large and popular city venue, which as the bombs rained down on the night of 12th December was being used as a makeshift bomb shelter. Tragically, at 11.44pm the building received a direct hit from a high explosive bomb and all 7 storeys collapsed onto the cellars trapping all those inside.  Only seven survived.