Armaments Centre of the World

Sheffield was an important centre for supplying the nation’s war machine. This wasn’t restricted to World War One, for the city had been developing and supplying arms and armour plate for over a half a century before.

Within a year of World War One starting it became clear that there was an acute shortage of weapons and ammunition, exacerbated by the large numbers of male factory workers enlisting to the forces. The solution was to give munitions factories and related industries priority over non-essential work with many production lines switched to munitions manufacture. Between June 1915 and November 1918 a number of local factories came under the control of the Ministry of Munitions.  Importantly, thousands of women also now entered the workforce, assuming the roles previously held by men that had been called up to fight.
Sheffield steel was used to make a range of armaments, from bayonets and guns to heavy naval shells, as well as defensive products such as helmets and armour plate. Local companies experienced major growth during the war resulting in a significant increase in the industrial labour force. By 1915 over 5,000 women were employed at Thomas Firth and Son’s National Projectile Factory at Templeborough which produced over 4 million shells and 2 million steel helmets. Hadfield’s had a workforce of over 15,000 by the time the war ended and was Sheffield’s largest employer. The scale of the task was such that new lodgings had to built in the city’s manufacturing areas to accommodate the influx of workers. 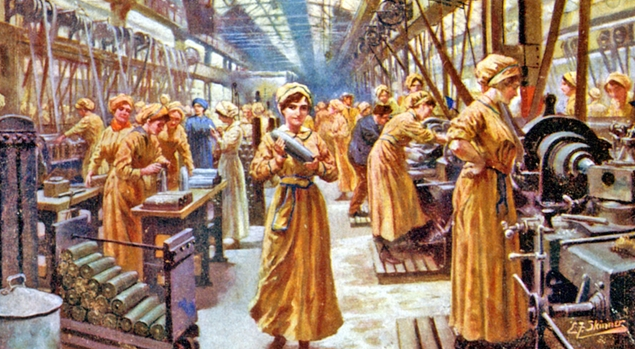 Minnie Seddon was one of thousands of women in Sheffield who helped to make up the shortfall in male workers. Minnie worked as ‘checker 95’ for Thomas Firth and Son’s National Projectile Factory.  Her poem ‘Munition Girls’ was published in the factory magazine ‘The Bombshell’ in 1918:

“In a factory I am working amid thousands of other girls,
Projectiles roll around my feet; o’erhead machinery whirls…
Oh, no! We must not grumble, for each is on her oath,
To do her very level best for King and Country both…
So you will see that after all we are very glad to go,
To do our precious little bit, and our patriotism show…” 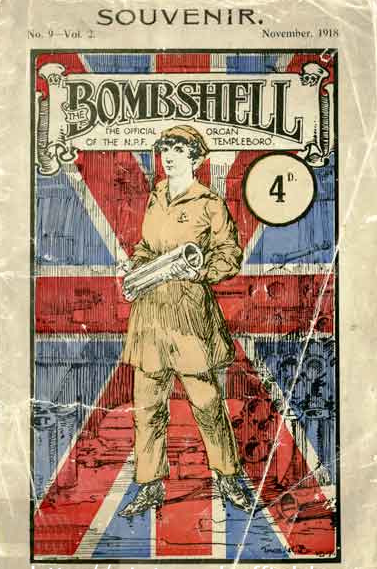 Cover of The Bombshell: a monthly journal devoted to the interests of the employees of Thomas Firth & Sons, Ltd., Norfolk Works, Sheffield. Vol. 2 no. 9, Nov 1918