Today's theme for #Archive30 is #fashion so we have listed our Top Ten ‘Taches from the archives - a light-hearted look at the men behind the moustaches who all featured prominently in Sheffield life a century or more ago... 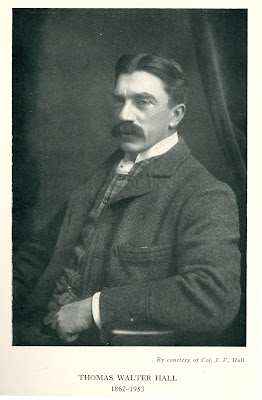 As well as leaving behind the memory of a magnificent moustache…Thomas Walter Hall has left us a hugely important legacy through his tireless efforts to preserve and promote Sheffield’s history and cultural heritage. He was born in 1862, the son of John Hall of Victoria Street, Sheffield, who worked as a surgeon.


In his younger days, T. W. Hall practised as a solicitor before retiring in 1910 to immerse himself in historical and antiquarian pursuits. Scouring the vaults of Sheffield solicitors’ firms and the muniment rooms of local landowners, crucially Hall helped to unearth, transcribe and catalogue hundreds of centuries-old manuscripts which now form the bedrock of key collections held at Sheffield City Archives.


Hall was a founder-member of the Hunter Archaeological Society (and its first chairman) and a longstanding member of the Public Libraries Committee. He lived at 6 Gladstone Road, Ranmoor.


Surprisingly perhaps, for such a handsomely hirsute fellow, Hall remained a bachelor. He died in Sheffield on 11 November 1953, aged 91. 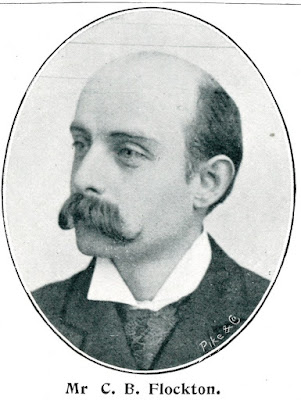 You might expect an architect pictured in the late Victorian era to have a well-sculpted moustache…and Charles Burrows Flockton does not disappoint! Born in Sheffield on 8 June 1867, he was from a well-known dynasty of Sheffield-based architects, the son of Thomas James Flockton (1823-1899) and grandson of William Flockton (1804-1864).


Although he worked in Sheffield, Flockton spent much of the early part of his career living in Worksop before moving back to Sheffield where he resided at Kenwood Knoll, Nether Edge and later at 67 Stumperlowe Crescent Road, Fulwood. 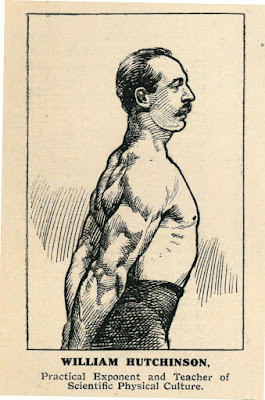 Whilst his moustache is perhaps not his most striking physical feature…William Hutchinson was a distinctive moustachioed male who stood out from the crowd on the streets of Sheffield in the early 1900s, wearing his moustache in the style befitting an Edwardian strongman.


Hutchinson was born in Birmingham in 1873. He grew up in the Aston district of the city and was the second oldest of ten children of Thomas Hutchinson who worked as a ‘drysalter’. By the 1890s, William Hutchinson had relocated to Sheffield where he married Charlotte Ada Hunt in 1896. The couple had two daughters Violet and Lilian.


By the turn of the 20th-century, Hutchinson was a ‘Sandow medallist’ in bodybuilding (the medal named after the pioneering German body builder Eugen Sandow). Hutchinson displayed his muscular physique in various ‘physical culture competitions’ designed to find the ‘most perfectly developed man’. As a well-known ‘physical culture expert’, Hutchinson  ran a ‘Physical Culture School’ at 33 Ecclesall Road, offering tuition in health, strength and conditioning, boxing and even roller skating! He also trained wrestlers and offered private treatment ‘for the cure of nervous ailments, indigestion, constipation and obesity’. He later worked at the Grecian Gymnasium on Broomhall Road. Ever looking for new ways  to promote health and fitness, in 1936 Hutchinson came up with a pioneering scheme of establishing a ‘sun-bathing club’ in Sheffield ‘designed to meet the needs of fatigued business-men in need of a midday rest’, claiming how ‘sunshine is essential to bodily fitness’ (See Sheffield Independent 8 June 1936). 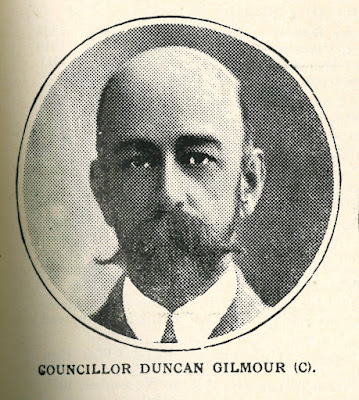 Many of the councillors serving on Sheffield City Council in the early 1900s  boasted fine moustaches (e.g. Herbert Hughes, George Addy, Robert Styring, George Luther Wood, Harry Parker Marsh, H. B. Sandford, W. C. Fenton and Wilfred Lawson Angel to name but a few…).  Arguably the finest moustache to grace Sheffield City Council Chambers was that donned by Duncan Gilmour. Gilmour was a Conservative representative of Upper Hallam Ward and later sat for St Philip’s Ward. On the Council, he was particularly noted for his contributions to the Education Committee.


Outside of local politics, Duncan Gilmour (born in Kingstown, Ireland c. 1852) also headed the well-known family brewery firm in Sheffield which bears his name (founded by his Scottish-born father Duncan Gilmour [senior]). The younger Duncan Gilmour also helped to found and chair the Sheffield Brewery Association. He was also a longstanding member of St Andrew’s Presbyterian Church in Sheffield, serving as church organist there for some 40 years.


Gilmour married Lizzie Blanche Toyne in Sheffield in 1881. They had a daughter Dorothy and a son Duncan (junior). Gilmour died at his home of Highbury, Sandygate Road, Crosspool on 12 July 1937, aged 85. 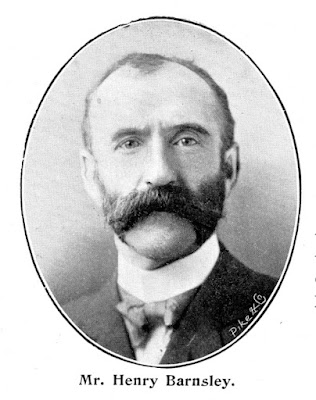 Henry Barnsley was born in Sheffield in 1847, the 7th child (and 4th son) of George Barnsley, founder of the steel and file manufacturing-firm George Barnsley and Sons of Cornish Works, Sheffield.


Henry Barnsley joined the family firm and was well respected in business circles. Having not taken much interest in civic affairs, he was not as prominent a public figure as his father (who served on Sheffield City Council for many years) or his older brother George (who was master cutler in 1883-1884) but he was certainly able to rival his better-known family members with his rather marvellous moustache!


Barnsley resided at Summerfield, Broomhill and later at Oak Vale, 33 Collegiate Crescent, Broomhall, Sheffield. He was twice-widowed, having married Mary Thackray in 1873 (who died in 1877, aged 30) and then Annie Tyzack in 1879 (who died in 1880, aged 37). Barnsley had three sons, George, Thomas and Percy. 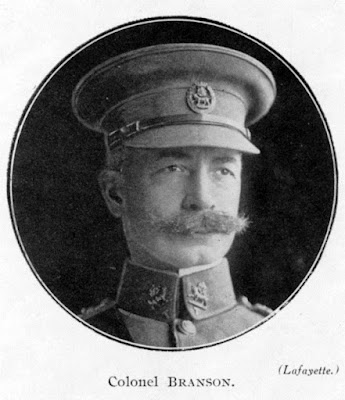 A list of prominent moustachioed men from Sheffield’s past would not be complete without a representative from the city’s military fraternity, who were renowned for the proud displays of facial hair ornamenting their upper lips!


George Ernest Branson was born in Sheffield on 20 May 1860, the son of Charles Anthony Branson and his wife Henrietta. He was educated at Wesley College and afterwards joined his father in the family solicitors firm of Branson and Son of Bank Street, Sheffield.

Branson received his commission in the Hallamshire Rifles in 1880, being promoted to captain in 1884, and hon. lieutenant-colonel in 1900. He served as Lord Mayor of Sheffield 1913-1914. During his time as mayor, Branson oversaw the acquisition of Endcliffe Hall for use as the new headquarters of the Hallamshire Rifles, thereby saving the historic former home of Sir John Brown from demolition. Branson’s mayoral term also coincided with the outbreak of World War One, where he was instrumental in the formation of the Sheffield City Battalion.

Colonel Branson resided at 54 Westbourne Road and later Broomsgrove Road, Clarkehouse Road, Sheffield. He died in Sheffield on 14 May 1940, aged 79. 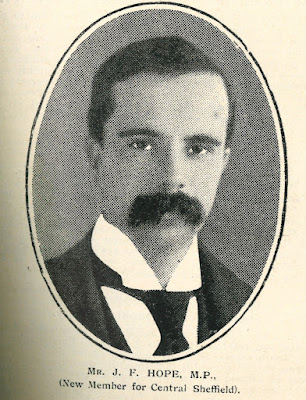 Several Sheffield Members of Parliament in the early 1900s had notable moustaches. Whilst perhaps not having quite the finesse of those exhibited by fellow Sheffield MPs around the same period such as John Tudor Walters (MP for Brightside), the Right Hon, C. B. Stuart-Wortley (MP for Hallam) and Colonel Sir Charles Edward Howard Vincent (MP for Sheffield Central), James Fitzalan Hope certainly possessed a moustache almost unrivalled in its bushiness!”


Hope was not a native of Sheffield but was a direct descent of the Dukes of Norfolk, the historic ‘Lords of the Manor’ for Sheffield. He was born in London in 1870, the son of J. R. Hope-Scott of Abbotsford House (in the Scottish Borders) and Lady Victoria Alexandrina Fitzalan-Howard, eldest daughter of the 14th Duke of Norfolk. He was educated at The Oratory School in Birmingham and at Christ Church, Oxford.


Hope served as Conservative MP for Sheffield Brightside from 1900 to 1906 and later Sheffield Central Division from 1908 to 1929. He was later raised to the peerage and became the 1st Baron Rankeillour of Buxted, Sussex in 1932.
Hope married Mabel Helen Riddell in London in 1892 and they had four children: Arthur Oswald, Henry, Joan Mary and Richard. After the death of his first wife, Hope later married Lady Beatrice Kerr-Clark in 1941. Hope’s main residence was Heron’s Ghyll, Uckfield, Sussex. He died at St Mary’s Hospital, Paddinton on 14 February 1949, aged 78. 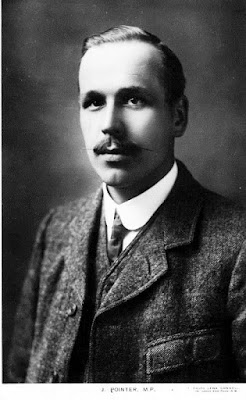 Joseph Pointer was renowned for being an assiduous MP and similar diligence and care and attention evidently went into grooming his moustache! His background was diametrically opposed to that of fellow parliamentarian James Fitzalan Hope above. A ‘working man’ and avowed socialist, Pointer was born (in June 1875) and bred in the Attercliffe district of Sheffield which he later served as MP. He was educated at a local council school before finishing his education at the Sheffield Central Secondary School.


Aged 15, Pointer was apprenticed as an engineer’s patternmaker. He became involved with trade unionism in 1895 when he joined the United Patternmakers Association and he also joined the Attercliffe Independent Labour movement. He struggled to obtain regular employment as a patternmaker after taking part in strike action and preaching socialism on street corners in Sheffield. In spite of his employment difficulties, he became chair of the Sheffield Trades Council and, in 1908, was elected to serve the Brightside Ward on Sheffield City Council. In 1909, following the death of the Liberal MP for Attercliffe, J. Batty Langley, Pointing stood for the Labour Party at the ensuing by-election and won a narrow victory, thereby becoming Sheffield’s first Labour MP. In parliament he became a Labour Party junior whip and a spokesman for the colony of Trinidad.


In 1902, Pointer married Jane Annie Tweddle, daughter of a sub-postmaster in Middlesbough, and the couple had a son Harold and two daughters, Dora and Ruth. Pointer’s promising political career was sadly cut short when he was struck down by sudden illness in 1914, which led to his death at his home of 84 Stafford Road, Sheffield on 19 November 1914, aged just 39. Pointer was universally esteemed by those on all sides of the political divide and Labour, Conservative and Liberal representatives joined a lengthy line of over 300 mourners at his funeral cortege in Sheffield. 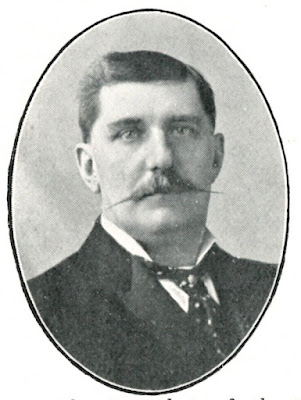 Alfred Russell Fox had the immaculately styled moustache of a man of scientific precision. He was born in Sheffield in 1853, the son of Mr William Fox, medical botanist and chemist of Snig Hill and Castle Street. He was educated at Milk Street Academy and Elmfield College York.


Fox entered into partnership with his father before becoming principal partner of the business of William Fox and Sons, medical botanists and family chemists of Castle Street, Sheffield.


An ardent botanist, Fox travelled all over Europe in his studies of the medicinal properties of plants and was one of the oldest members of the Sheffield Field Naturalist and Microscopical Societies. He became president of the Sheffield Chemical and Pharmaceutical Society and also served as a Liberal Councillor for Crookesmoor Ward on Sheffield City Council. He was also past master of the Britannia Lodge of Freemasons. 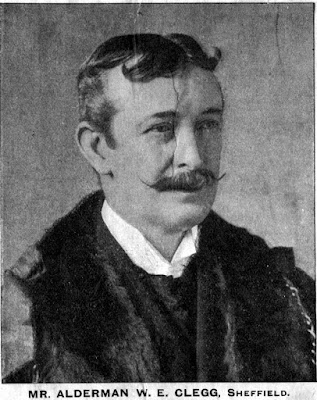 Sportsmen pictured in the late Victorian and Edwardian period were often noted for ‘sporting’ impressive moustaches and Sir William Edwin Clegg was no exception.


Clegg was born in Sheffield on 21 April 1852, the son of William Johnson Clegg (1826-1895), respected solicitor, alderman and former Sheffield Lord Mayor of Cliff Tower, Ranmoor.  William Edwin Clegg was educated at Sheffield and Gainford (near Darlington).


Clegg, along with his older (and equally impressively moustachioed) brother John Charles Clegg (1850-1937) was a gifted athlete and both excelled at athletics, football and cricket. Both brothers played international football for England and both followed in their father’s footsteps by becoming highly regarded public figures in Sheffield. Both became solicitors at the family firm of Clegg and Sons (of Bank Street, later Fig Tree Lane, Sheffield) and both were elected to serve as Liberal members on Sheffield City Council. As a solicitor, William Edwin Clegg notably defended Sheffield’s notorious criminal Charles Peace at the trial which led to Peace’s execution for murder in 1879.


Additional portraits and further information about such memorable moustachioed men of Sheffield and their contemporaries can be found in the historical sources held at Sheffield City Archives and Local Studies Library. See, for example: the local newspaper collection, Sheffield ‘Red Books’, yearbooks and directories, census records, parish registers, cemetery records, www.picturesheffield.com and publications such as Sheffield at the Opening of the 20th Century: Contemporary Biographies  by S. O. Addy and W. T. Pike (1900) and Sheffield and District Who’s Who (1905).  Images © Picture Sheffield.