The fascinating diary of a Sheffield man has come to light which offers a unique window on everyday life in Sheffield between 1836 and 1838. 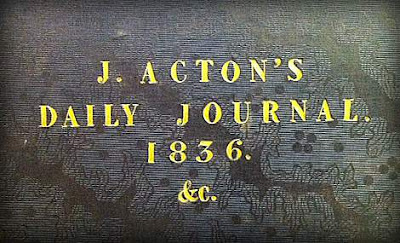 Almost every week, Sheffield Archives gets offered something of historical interest.  Items range from ancient deeds to modern council records.  This week a particularly interesting volume was donated to the City Archives -  the personal journal of John Acton, Chemist & Druggist, whose shop was located at 28 Union Street in Sheffield.  The 460-page volume, donated by one of his descendants, contains daily entries which offer a fascinating window onto the life and times of the man and the town of Sheffield between May 1836 and May 1838. 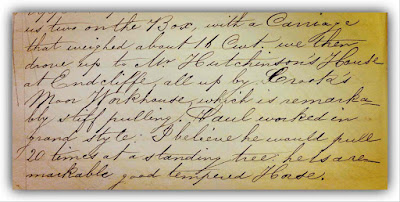 Here we can read not only his daily accounts of the weather, the newspapers he was reading (with his comments on items of local and national interest), his regular attendance at the Carver Street Methodist Chapel and of driving his mother and sister out in the family horse and gig, but also descriptions of local amenities that highlight the development of Sheffield at that time.  Thus, in June 1836 he drives to Redmires to view the large dam then under construction (“…a beautiful drive, the air was delightful.”).  A month later he comments on the number of people passing his house to visit the Botanical Gardens (“…open again to the public… the admittance is one shilling…”), and describes a visit to the new swimming bath on Glossop Road (“…the charge is three pence, and they find you a towell” [sic]).  In September of the same year he attends the opening of the Chapel at the “new [General] Cemetery”.  He also mentions attending a lecture

Acton’s journal includes passing references to his business (cleaning the shop, work in the warehouse, preparing medicines and buying equipment).  He makes little reference to the volume of trade, other than in January 1837 when he writes: “I have not had such a brisk physic trade for years as I have just now, nearly every house in Sheffield is visited with the influenza.”  He later writes: “I believe I have a touch of it myself…”  Evidently he survived; but what became of the man born in Wakefield in 1800 who came to Sheffield as a fifteen year old?  Census records show that in 1851 John Acton, aged 51 and unmarried, was living at 28 Union Street with his mother and sister.  Sheffield trade directories show him in business until 1856.  Five years later he is in Fairfield, Buxton, described in the census as a chemist and druggist living with his wife Harriet Elizabeth (twenty-six years his junior) and their son and twin daughters. The couple would go on to have eight children in total.  John Acton died in Fairfield towards the end of 1872.
John Acton's journal can be viewed at Sheffield Archives upon request (ref.no. X691).