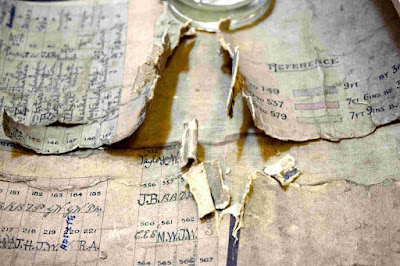 Earlier this year, Sheffield Archives received a 115-year-old plan, showing the churchyard extension to Treeton Church, as an addition to our holdings of the ancient parish church of St Helen’s Treeton. The coloured plan, which dates back to June 1895, details the location of numbered grave-plots and is annotated with names and initials, evidently relating to grave-owners/occupiers. Such churchyard plans, where they survive, are extremely useful in enabling researchers to pinpoint the location of lost graves of loved ones and family members.


However, the condition of the plan at this time of its deposit was such that it was rendered largely unusable. The plan arrived in a highly fragile and fragmentary state with detached sections, evidently damaged by damp and blighted by large amounts of surface and ingrained dirt. Not only was much of its informational content (including numbers of plots and names) unreadable, the plan’s extremely fragile condition prevented it from being made available for public consultation. 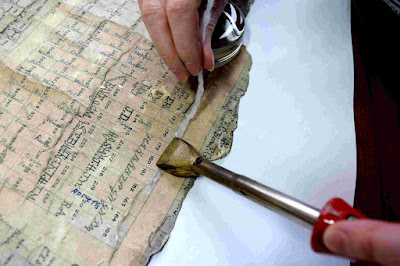 Thanks to the work of Sheffield Archives’ Conservation Unit, the plan is fully conserved, preserved for posterity, accessible to the public and useable again.
Interestingly, the restoration of the plan has also revealed the location of three World War graves in the churchyard at Treeton: one of a First World War soldier and two of Second World War servicemen.
The First World War soldier was Sergeant Thomas William Cooper who served in the York and Lancaster Regiment (5th battalion) and died 100 years ago aged 24. Cooper was born in Chapeltown in 1890 and was one of 11 surviving children of William Cooper, a miners’ lamp repairer, and his wife Sarah Ann Cooper. The family lived at 78 Wood Lane, Treeton. A Treeton Church burial register held at Sheffield Archives (Ref. PR77/4/2) records that Cooper was buried in the churchyard on 13th January 1915 but ‘died at Gainsboro’ [in Linconshire].


Cooper’s First World War military service record (viewable on the family history website www.ancestry.com to which free access is available at Sheffield Archives and Local Studies Library) reveals that he was admitted to the 3rd West Riding Brigade Hospital, situated on Ropery Road, Gainsborough, Lincolnshire, on 30th December 1914, suffering from pneumonia. He was then transferred to the John Coupland Hospital in Gainsborough on 7th January 1915 as his condition worsened. Sadly, Cooper succumbed to pneumonia three days later and his body was repatriated to his family in Treeton for burial (he is buried in grave number 140 in the Treeton churchyard extension). Cooper’s military service record also reveals how he enlisted a few years before the war in April 1908, aged 18, and that prior to joining the army he worked for the Rothervale Colliery Company. 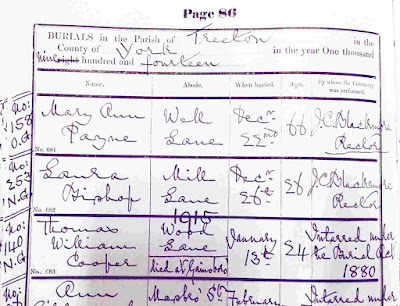 Cooper is the only recorded First World War casualty buried in the churchyard at Treeton. However, there are also two recorded soldiers who were casualties of the Second World War buried there: Aircraftman (2nd Class) Reginald Irving Payne (son of William and Edith Payne of Treeton) who served in the Royal Air Force Volunteer Reserve (23rd squadron) and died on 25th September 1940, aged 31 (buried in grave number 36 in the churchyard extension); and Able Seaman George Edwards (son of Oliver and May Edwards of Treeton) who served in the Royal Navy and died on 25th November 1944, aged 21 (buried in grave number 326 in the churchyard extension). The newly restored churchyard plan at Sheffield Archives clearly shows the location of each of the three war graves (with grave number 36 annotated with the surname ‘Payne’ and number 326 annotated with the surname ‘Edwards’). All three servicemen are commemorated on the Commonwealth War Graves Commission website: http://www.cwgc.org/.
The tricky task of conserving the perilously fragile Treeton churchyard plan fell to Sheffield Archives’ Preservation Assistant Sarah Oliver. Under the supervision of Conservator Antony Oliver, Sarah first mechanically cleaned the plan with a dry chemical sponge and a soft dry brush. She then flattened the plan (which had previously been stored rolled up) and repaired its numerous tears with Filmoplast heat-set tissue, re-joining the detached sections with Filmoplast and infilling missing areas with mixed mulberry Japanese paper fortified with Filmoplast. She secured parts which were separating into layers at the edges with methyl cellulose. Finally, Sarah encapsulated the plan in a polyester sleeve and made a bespoke protective 4-flap folder out of archival material in which to house it. 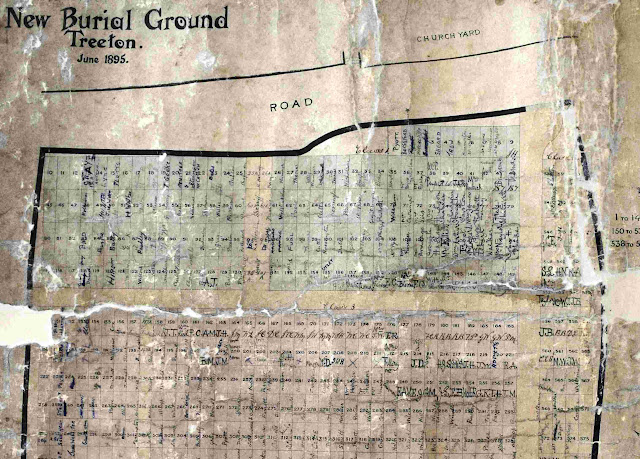 The restored Treeton Churchyard plan is an example of one of hundreds of fragile and damaged items which the Conservation Unit at Sheffield Archives conserve each year to ensure they are accessible to the public and safeguarded for future generations. As well as carrying out highly skilled conservation work on Sheffield Archives’ holdings dating back to the 12th century (including conservation of paper and parchment documents, wax seals, maps and plans, bound volumes, photographs, etc.) the Conservation Unit is also able to carry out work for private customers. For more information see: https://www.sheffield.gov.uk/libraries/all-libraries/conservation-unit.html.
onserved plan of Treeton Churchyard Extension, 1895 (Sheffield Archives: PR77/15/1).