From the Archives: Sheffield and the Lusitania riots of 1915

Local history researcher, Mike Higginbottom, has been using the newspapers and directories at Sheffield Local Studies Library to try and find out what happened to his granddad’s shop during World War One.  What he found sheds interesting light on how the sinking of RMS Lusitania by a German U-boat had serious repercussions in Sheffield.  Mike has kindly allowed us reproduce an abridged version of his research…


The Lusitania riots of May 1915 seem to be largely forgotten, in Sheffield at least.


I’ve always known about them because there’s a family legend that Granddad’s picture-framing business went to the wall when his shop window was smashed in the Lusitania riots in Sheffield’s industrial East End.  It seems that he’d neglected to take out insurance.  Granddad’s shop certainly existed.  He appears in the 1915 edition of White’s Directory: ‘George Higginbottom, picture framer’ at 86 Worksop Road.  The venture was presumably short-lived, because he isn’t in the 1914 or 1916 editions of local directories.   For most of his working life he worked in the coke-ovens, mostly at Tinsley Park colliery but at one period at Smithy Wood, in the Blackburn valley north of Sheffield.  In his spare time he was a sufficiently talented landscape artist to sell canvases, on one memorable occasion for £5, to the wonderment of family and neighbours, none of whom were used to seeing a ‘white fiver’.  In May 1915 he was 31 years old and married to Ada, née Cutting, who was three years younger. They had grown up on adjacent streets in Darnall. They had two young sons, Arnold, who was 2½, and Cyril, my dad, who was eight months old.

The sinking of the RMS Lusitania by a German U-boat in the early afternoon of Friday May 7th 1915 was regarded as an atrocity in Britain and the United States. The deaths of 1,198 passengers and crew released an upsurge of anti-German emotion that spread across Britain, fanned by the press. The riots were particularly vicious in Liverpool – which was the liner’s destination, the headquarters of Cunard Line and home to many of the liner’s crew – starting on Saturday May 8th and continuing for several days.  Similar disturbances were reported in Birkenhead, Bradford, Newcastle-upon-Tyne, Manchester, Salford and London.


There was apparently no sign of disturbances in Sheffield, according to the Sheffield Daily Independent, until Thursday evening, May 13th, when someone threw a flower-pot through the window of a pork butcher, Herman Zeiher (misspelt “Zither” in the newspaper), at 85 Broomhall Street, and the windows of two more pork butchers, close together on opposite sides of Attercliffe Common, John F Bullinger at 56 and Christopher Readle at 173 were attacked.


The following morning the troubles resumed between nine and ten o’clock, starting at the pork butcher’s shop of Frederick Charles Carley at 131 Attercliffe Common, near to the Attercliffe Burial Ground.  According to the Sheffield Daily Independent, “the window was smashed to fragments and in a short space of time the shop was practically emptied of all its contents”.  When the police turned up the crowd moved a hundred yards along the Common towards Tinsley and revisited Readle’s shop where the window had been broken the night before, and then moved a little further along to the shop of Alfred G Friedrich at 249 Attercliffe Common, near the corner of Janson Street.  By eleven o’clock the crowd turned back towards Sheffield, and on their way kicked some of the boarding that John Bullinger had put up to secure his premises. The boundary between Attercliffe Common and Attercliffe Road was the recently opened Globe Picture House.  A short way past there the crowd wrecked the butcher’s owned by George Hannemann & Sons, 855 Attercliffe Road, near Newhall Road, and occupied by William Hannemann, who was born in Attercliffe. 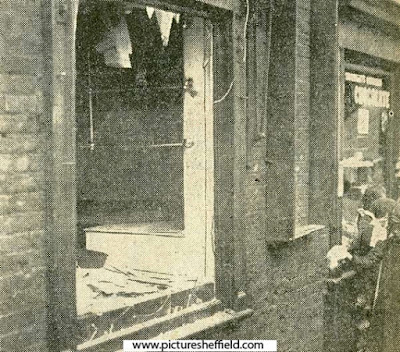 “At Hannemann’s shop a remarkable thing appears to have happened, for the women in their attack seem to have recollected the superstition attached to the breaking of mirrors, and in this case not a single piece of mirror-glass was broken, although the shop internally was lined with mirrors. Everything else inside, however, was completely wrecked, and the whole front of the shop was smashed.” (Sheffield Daily Independent, 15 May 1915).


Further up Attercliffe Road, at no 693, between Christ Church and Zion Lane, the crowd “sacked” the shop belonging to Mrs Sophia Carley, mother of Frederick Charles Carley whose shop was damaged the night before.


It had become clear that the crowd were not particularly concerned to attack only German businesses, and were more interested in clearing pork butchers of their stock: “One man coolly attempted to march past a police inspector with a flitch of bacon over his shoulder and when asked where he was taking it he laconically remarked, “Home.” He was advised to deposit his flitch at the Attercliffe Police Station, and this he did, leaving also his name and address.” (Yorkshire Telegraph & Star, 14 May 1915)


Another group of women, “who had possessed themselves of bunches of black pudding and polony, politely requested a Press photographer to take a snapshot of them, which he obligingly did.” (Yorkshire Telegraph & Star, 14 May 1915)


A shop at 583 Attercliffe Road, between Oakes Green and Chapel Street (across the road from where, a decade later, Banner’s store would be built) belonged to Herbert Leech. He was a Londoner, born in Bethnal Green, who had lived in Chesterfield and then Sheffield; his wife was a German woman who had lived in England for thirty-six years.


“Missiles of all descriptions were rained on the windows, and a Union Jack, which was flying from a bedroom window, was torn down by a man who was hoisted up by the willing hands of the mob. The shutters, which had been fixed up just previously, were pulled down and used as battering rams against the window, while the door was forced open. An errand boy who was in the shop at the time beat a hasty retreat into the kitchen, and from there he saw one man shoulder a bag of flour and take his departure. Every other article of food was looted in a surprisingly short space of time, and then the crowd invaded the kitchen.” (Sheffield Daily Telegraph, 15 May 1915)


The police arrived by motor-car and, assisted by a mounted policeman, dispersed the crowd and stood guard over Leech’s shop.   A Star reporter interviewed Mr Leech and later on his way home, the reporter was accosted by a gang of young people “who appeared to have an idea that anyone who was not rejoicing with them and participating in the work of destruction must of necessity be a German spy.” (Yorkshire Telegraph & Star, 14 May 1915)


During the afternoon two shops belonging to Mrs Jane Elizabeth Redfern, one at 153 Newhall Road on the Attercliffe side of Newhall Bridge and the other at 421 Attercliffe Common more or less opposite Carbrook Church, were “…destroyed, because, though English herself, it was said the Mrs Redfern employed a German”.  Other shops were wrecked by the mob that afternoon including Mr Barrott’s shop and Walter Shearstone’s premises.  George Higginbottom’s picture-framing shop was six houses down from the Cutler’s Arms pub almost directly opposite Barrott’s pork butchers and a short distance from Shearstone’s confectioners.   There is no mention in any of the press articles of a picture-framer, so I surmise that his window was broken in the confusion and not noticed by reporters from any of the three papers.


Other disturbances were reported on The Moor, in Hillsborough, and at Tinsley where a Mr Wall at 342 Bright Street, on the corner with Southern Street, attempted to defend his wife’s grocery shop by firing a blank from a revolver and had to be rescued, with his wife, by the police and sent away in a taxi.


The Sheffield Daily Telegraph reported, in the Monday May 17th 1915 edition, that
“Detective officers and uniform men were busy all through Friday night and Saturday in tracing the stolen property, and the results of their efforts [were] seen on Saturday morning when Attercliffe Police Station resembled an up-to-date pork butcher’s shop. There were eight or nine hams, seven sides of bacon, boiled hams of tempting quality, pigs’ faces and feet, half-a-dozen legs of pork, tubs and tins of lard, tins of pork fat, links of poloney, black puddings galore, brass weights, plates, dishes, potted meats and brawn and a host of other things.”


It’s clear from the press accounts that it must have been a terrifying experience to be anywhere in Attercliffe that day, particularly in premises that couldn’t be defended against the weight of a thousand-strong crowd.  Whether or not George was at home, Ada had two tiny children to protect and saw the picture-framing business destroyed in minutes. The family had no German connections of any kind.  Later in the Great War George was called up: his son Cyril’s first memory of his father is of him about to leave the house in uniform for the services, to Ada’s great distress. Between the wars George stayed in constant employment, and they had four more children up to 1926.


For a period in the 1920s they left Attercliffe for Chapeltown, a few miles to the north, and Ada ran a shop in her front room on Station Road that was locally celebrated for her home-made ice cream.  George ran painting lessons from home in his spare time. But he never again risked a picture-framing shop!


© MIKE HIGGINBOTTOM, 2015
For more information on researching the First World War and its impact on Sheffield, visit our WW1 web pages: www.sheffield.gov.uk/1914-1918
Image © Picture Sheffield (Anti-German riots in Sheffield. Shop in Attercliffe Road which was attacked and stripped of its contents, May 1915: y05785).