Sophie Maxwell, a student from the School of English at the University of Sheffield, has been spending time, as part of her Masters degree, in the archives uncovering some fascinating documents which tell the history of Sheffield.  In a series of blogs, she will share her findings…

This is the first in a number of articles that aim to demonstrate and comment upon the scale, diversity and relevance of items held at Sheffield Archives and Local Studies Library. Through my research undertaken into individual documents, I hope to pique the curiosity of residents of Sheffield and beyond, and to emphasize the importance of these archival resources in maintaining our understanding of local culture, history and heritage. 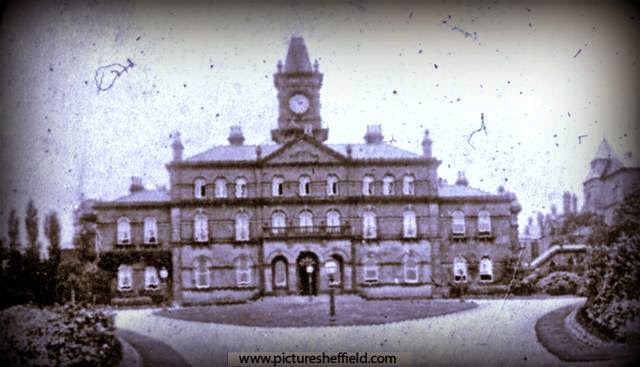 In 1872, a psychiatric hospital known as the South Yorkshire Lunatic Asylum opened to receive its first patients.  Located in north-west Sheffield at Wadsley Park, the hospital alleviated the overcrowding at a similar institution at Wakefield, and soon became home to over a thousand patients.
Middlewood Hospital, as it later became known, existed as part of new developments in the fields of mental health and psychiatry.  The County Asylum Act of 1808 required the building of hospitals for those who suffering from psychiatric disorders. Frequently, poor mental health and poverty came hand in hand, as social stigma and a widespread lack of understanding encouraged families to neglect or abandon less-able relatives.  As such, institutions like Middlewood Hospital became home to occupants suffering from various ailments that, by today’s standards, seem peculiar or even outrageously inappropriate for care in a mental health hospital.
The Registers of Patients, housed at Sheffield Archives, shed light on the attempts made by staff to catalogue and comprehend admissions in the early years of the asylum’s existence. 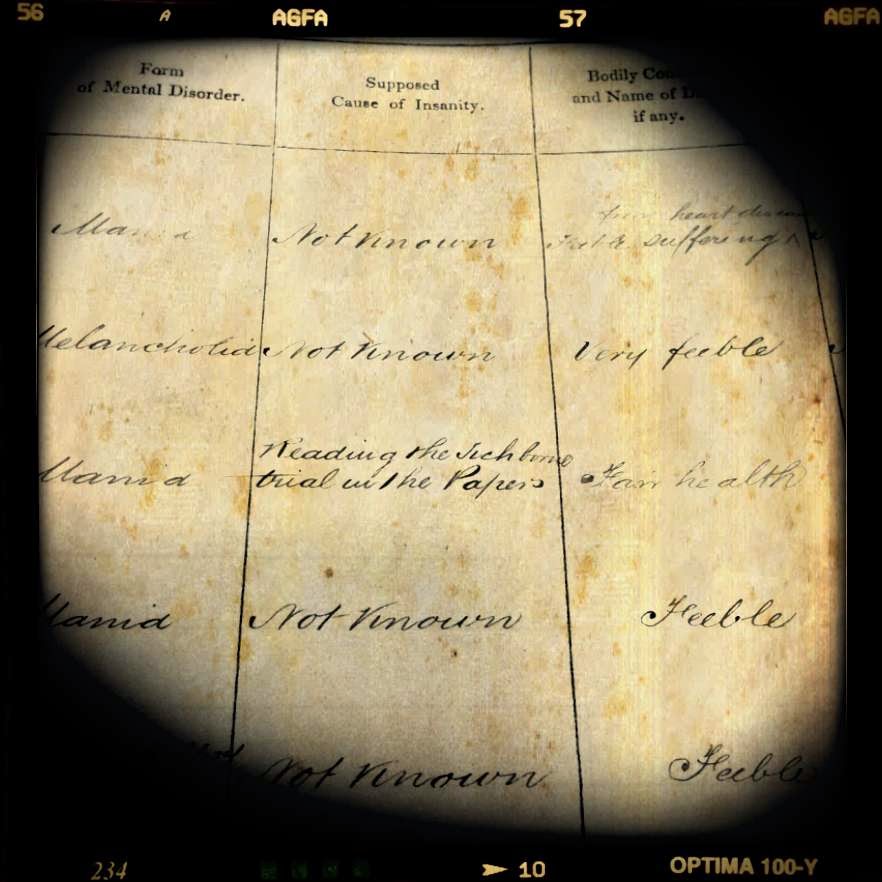 The information recorded in the register is for the most part available online at the Archives’ website, but the experience of engaging with the physical document goes far beyond the data itself.  The smell of old paper, the faded handwriting, the wear at the top corner of each page from the touch of many fingertips - these personal touches all serve to create the sense of a strange and important piece of social history.
Some details recorded in the register are not available online.  These include the medical history and details of each patient, tick boxes recording ‘epilepsy’ and ‘congenital idiocy’, and a column denoting the manner of each patient's release. Browsing the entries in the physical volume allowed me to see the high number of patients who were discharged only upon death, often as much as half a century or more after their admission.


One of the more macabre and strange elements of the register is the column denoting 'supposed cause of insanity'. The word ‘supposed’ shows the uncertainty surrounding these early diagnoses.  While in the majority of entries this column reads 'not known', 'unknown' or 'cannot say’, some suggestions are intriguing and surprising.  Examples of this ‘supposed cause of insanity’ include ‘childbirth’, ‘religion’, ‘sun stroke’ and the bizarrely vague ‘change of life’.
Some ‘causes of insanity’ are of a particular historical relevance, such as the entry reading ‘excitement over the election’, which presumably refers to the Sheffield Attercliffe by-election of 1894.  One patient, Ann Conway, is listed as suffering from ‘mania’ after ‘reading the Tichborne trial in the papers’ (pictured). This trial refers to an infamous and highly publicized missing person’s case, in which a man claiming to be the long-lost heir to the Tichborne baronetcy in Hampshire appeared from Australia, only to be denounced as an imposter and sentenced for perjury in 1874.

The personalities and stories of thousands of Yorkshire residents are hinted at in the pages of this register. Though most are surely long forgotten, each name represents a life spent, at least in part, within the walls of South Yorkshire Lunatic Asylum, on the outskirts of society.


Nowadays many of the hospital buildings have been demolished, but some, such as Kingswood Hall and Middlewood Lodge, remain in the form of flats and accomodation.
Sophie Maxwell