The story is in the story: Malcolm X’s visit to Sheffield in 1964 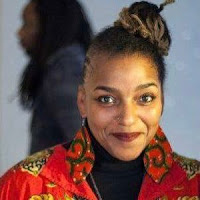 Désirée Reynolds has been the Writer in Residence at Sheffield City Archives for five months now and in that short time, she has uncovered some fascinating and hitherto unsung histories of Black Sheffield residents in the archives. Although her work has focused on hidden lives and marginalised voices, she has also revisited more widely known stories from living memory. One such account took her back to the 1960s, a time of rapidly changing culture, values and behaviours - particularly among young people. The University of Sheffield’s Students’ Union was, by this time, becoming more political, with protests against the Vietnam War and high-profile speakers such as Malcolm X drawing large audiences. 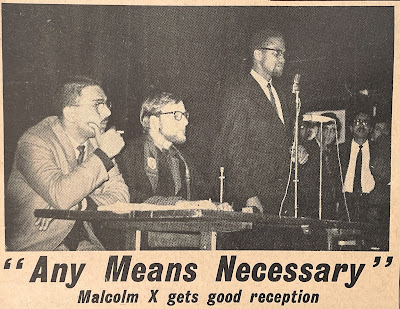 Malcolm X (born Malcolm Little, 1925 -1965) was an African American leader in the civil rights movement and a vocal advocate for Black empowerment during the 1950s and 1960s. Formerly a member of The Nation Of Islam, he left this organisation to forge his own path; the fight for civil rights would not have been the same without him. He was invited to speak at the Students’ Union in Sheffield on 4th December 1964 - one of only three places outside of London where he spoke. In his speech Malcolm X declared: “We are not fighting for civil rights; we are fighting for human rights. Freedom is a valuable thing. To get it I would use any means necessary, any time.” Afterwards, the Students’ Union gazette, Darts, wrote enthusiastically about his visit, describing in detail the hour-long speech, given to one of the largest audiences ever seen in the Union. 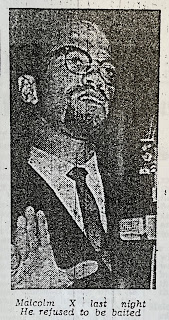 An original copy of Darts from 1964 - somewhat yellowing and brittle - still survives in the annals of Sheffield Local Studies Library - one of the few surviving accounts that recalls Malcolm X’s visit to Sheffield. This would have been the end of the story if Désirée hadn’t dug a little deeper: ‘there must be more.’ A trawl through the newspapers revealed a number of unsettling articles in the local press. ‘Row feared over Malcolm X visit’ warned The Star, ‘visit likely to cause racial troubles.’ In the Sheffield Telegraph the following day an inflammatory article claimed: ‘over 700 angry students hissed Malcolm X at Sheffield University last night’. The student body took exception to this, arguing the report grossly misrepresented what took place.

‘Malcolm X visits Sheffield Dec 1964. A headline predicts trouble, there wasn’t any. The Sheffield Telegraph make up a story that he was hissed at by 700 students. They didn’t. A petition is made against the paper’s misinformation. Even then. 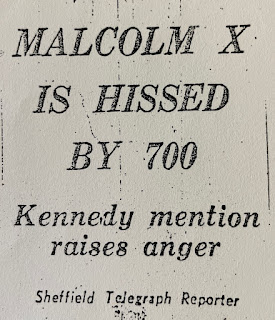 The story is in the story…

They tried to draw him into a comment about, by this time, a dead Kennedy. Malcolm refused to be baited.

“I believe in the brotherhood of the human race and don’t care to know anybody who is not prepared to be my brother.”’

A mass protest in the form of a petition was hand delivered to the Star and Telegraph offices and a separate protest was made by the Secretary of the Union who wrote to the Telegraph expressing his dismay at the ‘violent distortion in the report, which he felt was especially ironic in view of Malcolm X’s opening remarks, in which he had stressed the danger of an irresponsible press’.

Malcolm X visited Britain once more - in February 1965 - to speak in London and Smethwick. A few short weeks later, following his return to the U.S., he was assassinated.

This story is thought-provoking on many levels. It points to a prevailing racist culture in Britain; Malcolm X’s visits were met with hostility and lies from the press, underlining the national race row which challenged what it meant to be British in the post-war years. It reminds us, too, that when we look at historical records, we must ask: whose truth are we reading?

Désirée Reynolds and archivist Cheryl Bailey will be talking more about the hidden histories, silent voices and important discoveries they have found in Sheffield Archives at their Off The Shelf event: