George Bassett established Bassett’s the confectionery firm famous for Liquorice Allsorts and Jelly Babies in Sheffield in 1842.  Over 150 years on, the firm is still going strong and is now part of the Cadbury Trebor Bassett franchise. It is their biggest confectionary site in Europe and produces over 40,000 tonnes of sweets and crisps each year including the ever-popular Bassett’s liquorice and Trebor mints.

(Sheffield Archives Ref:X159/1). It describes how Bassett was apprenticed to William Haslam, a confectioner of Chesterfield.  As the document shows, Haslam agreed to provide his new apprentice with ‘sufficient meat, drink, lodgings, and all other necessaries’.  In return, Bassett was expected to be a ‘faithful apprentice’ for seven years, agreeing ‘he shall not play cards of dice table’ and ‘he shall not haunt taverns or playhouses’.

Bassett lived from 1818 until 1886, he was a very successful businessman, and was also elected Lord Mayor of Sheffield in 1876. However, Bassett's most famous products, Jelly Babies and Liquorice Allsorts, were actually created after his death.

Allsorts were created in 1899 as the result of a happy accident (or so the story says). Charlie Thompson was a salesman at the Bassett's company. He tripped while he was carrying a tray of separate liquorice and paste candies to show a potential customer. The candies became jumbled up, creating odd combinations. The customer was impressed and placed an order for the mixed-up candies - the first Liquorice Allsorts.

To find out more about the story of George Bassett’s there are various documents in our collection including:

Or search our online catalogues for more material. 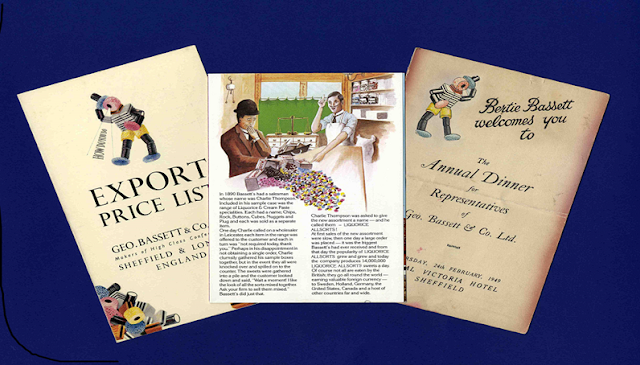