A year in archives: collection highlights from 2020

Last year was a strange time, pandemic and all, but despite the obvious obstacles Sheffield City Archives continued to run a service and collect new archive material.  In fact, Covid meant that many of you found the time to clear out and donate items to the archives, while others deposited their own responses to the pandemic in the form of diaries and photographs.  Here’s a brief look at some of the collection highlights from 2020…
What was life like in Sheffield in 2020?  This is a question that will be asked time and time again in the future.  But how much will we remember of these strange times?  It was (and still is) very real with rolling news coverage, lockdown restrictions and a profound change in everyone’s way of life.  However, restrictions will hopefully soon be lifted and 2020 will become a distant memory; we will soon forget the everyday experiences (good and bad, exceptional and mundane) that make this period in history so unique.  In March last year, we put a call out for people to record their own experiences of lockdown so that we could add them to the archives.  You responded immediately and as a result, we have amassed an incredible archive of material.  Pictured is one of the famous ‘Frontline Warrior’ images produced by Pete McKee. The series depicting different key workers with the strapline: 'Be Kind To The Frontline'. During the pandemic, artwork from this series popped up on billboards in Manchester and Sheffield. Following an enthusiastic response on social media, copies of selected prints were sold to raise money for NHS Charities Together. A full set of 'Frontline Warriors' was kindly printed and donated to Sheffield City Archives by Pete McKee in Aug 2020. 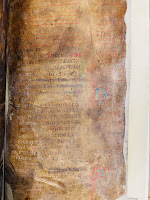 Not everything we received last year dated from modern times.  We were very pleased to receive a Parish Register from St Mary’s Church, Handsworth dating back to 1558.  The volume is called a ‘Composite Register’ as it records all baptisms, marriages and burials at Handsworth Parish Church from 1558-1667.  It had been kept quite safely at the church until now. At some point in the 1970s it went for re-binding at the Public Record Office in Kew, London.  When the original binding was removed it was found to be much older than the actual volume - possibly dating from the 1300s-1400s.  It is illuminated and contains notes for the intonation of words; a passage from John’s Gospel is also discernible.  Both bindings will be carefully retained, but our Conservator will re-bind the volume to ensure it is encased in a stable, future-proof cover. 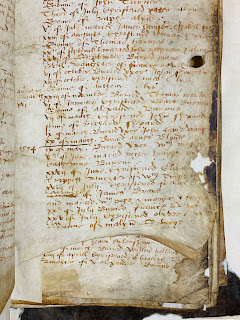 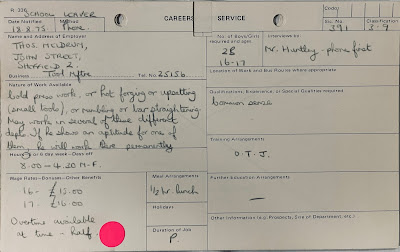 In December 2020, while sorting out some old papers, a bundle of vacancy slips for July-August 1975 were spotted by an eagle-eyed depositor.  Instead of putting them in the bin, he offered them to the archives as a snapshot of the job market for school-leavers in Sheffield in the 1970s.  The adverts have a section for qualifications, experience and special qualities required of applicants which, by today’s standards, are somewhat eyebrow-raising!  Sheffield District Council wanted a trainee plan printer, preferably someone ‘not too ambitious but reasonably intelligent with an interest in photography’.  John Wenninger’s, the butchers on Abbeydale Road, were looking for sales assistants, ‘local girls preferred, neat, tidy, clean and well-spoken’.  Steeples, the chemist on White Lane, wanted someone ‘bright and of good appearance’ but most importantly ‘with clean fingernails’.  G.T. News on Brooklands Avenue simply wanted someone ‘sensible’ while Ernest Burgess was in search of a Junior Sales Assistant, preferably ‘smart and quick’ but above all ‘a nice lad’.  Jobs were also going at Proctors, the furniture store on Haymarket - ‘academic qualifications are not required’ stated the ad, but ‘common sense is a must’.  School leavers could also try their hand at becoming ‘Whippers’ (fastening runners onto fishing rods with thread) with Truflex on Cadman Street - qualifications: ‘conscientious and good with fingers’.  And finally, a General Labourer was sought for sought for a property repair business on Parson Cross Road - the young man had to be ‘tall and strong’ and ‘live locally, S5 or S6’.  There was certainly an interesting array of trades school-leavers could enter into, although whether candidates fitted the bill was another matter! 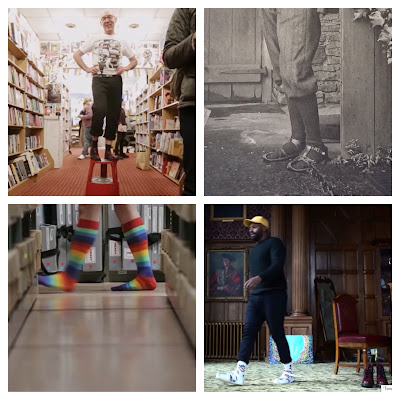 Finally, we had an unusual and rather special donation from Sheffield-based artist and lecturer, Yuen Fong Ling who has been working on a project called 'Towards Memorial' which explores the re-making of bespoke sandals originally designed and made by socialist, writer, poet and activist Edward Carpenter.  The project began at Sheffield City Archives on discovering examples of sandals Carpenter collected as reference, alongside a small newspaper advert, original photographs of Carpenter wearing the sandals, and paper foot patterns from his customers, one which was inscribed with 'Self 1892', pertaining to Carpenter himself. This led to a visit to The Garden City Collection in Letchworth to see an example made by his artist, friend and collaborator George E. Adams. Re-making the sandal was a way of interpreting the archive material and translating these sources into a contemporary design using modern materials, with ethical shoemakers Noble & Wylie (formerly Guat Shoes, established Sheffield in 1978). Each pair of sandals are handmade and stamped on each inner sole with 'Self 1892', as well as '1844' and '1929' to commemorate Carpenter’s year of birth and death.  The sandals have been initially gifted to members of The Friends of Edward Carpenter, a group of enthusiasts (and activists in their own right) who aim to commission a permanent public memorial to Carpenter in Sheffield city centre.  A number of short films were made by Picture Story Productions, Sheffield to document the production, gifting and wearing of the Carpenter sandals.  The films can be seen here: https://www.youtube.com/user/SheffieldArchives1 A pair of sandals were also gifted to the archives; these sit alongside Edward Carpenter’s original sandals. 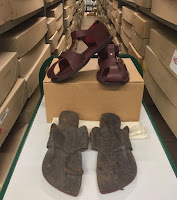 We also took in public records from Sheffield Magistrates' Court, HM Coroner and Sheffield Teaching Hospitals NHS Foundation Trust.  Records were also deposited by the Diocese of Sheffield, Sheffield City Council and a number of local businesses and private individuals.
A full list of our new accessions will soon be published on The National Archives’ website: https://www.nationalarchives.gov.uk/accessions/
You can also search Sheffield City Archives' online catalogue here: http://www2.calmview.co.uk/SheffieldArchives/CalmView/Default.aspx?
Picture captions (from top):
Frontline Warriors by Pete McKee (X906);
The original binding from the St Mary's Handsworth parish register (illuminated text visible, dating from the 1300s-1400s); page from the St Mary's Handsworth parish register - note the shape and curve of the parchment which is made from animal skin (PR158);
Vacancy slip for Thomas Meldrum's, tool manufacturers on John Street, 1975 - main requirement of school leaver was 'common sense' (X920);
Sandals deposited by Yuen Fong Ling - as worn by Magid Magid, Somali-British activist and politician who served as Lord Mayor of Sheffield from May  2018 to May 2019, Mike Jackson, co-founder of Lesbians and Gays Support the Miners (LGSM) and the Friends of Edward Carpenter (FOEC), 2019; Yuen Fong Ling's sandals pictured next to Edward Carpenter's sandals in the archives, 2020 (X903).