In the mid-nineteenth century, Sheffield steel magnate Sir John Brown (1816 - 1896), head of the renowned steel firm John Brown and Company, wanted a home befitting his status as one of the leading industrialists in the Victorian age. The result was Endcliffe Hall, a magnificent 36-room mansion situated on Endcliffe Vale Road, built between 1863-1865 by local architects, Flockton and Abbot: the largest private residence in Sheffield. 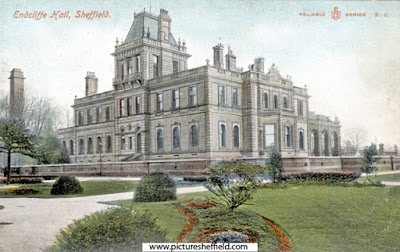 For the past 100 years, the building has been in military hands and out of bounds to the public. Now, thanks to the efforts of the Conservation Unit at Sheffield Archives, a newly-restored sale plan for Endcliffe Hall (dating from July 1895) is publically accessible again, offering us a fascinating window into this remarkable home.
The sale plan, held at Sheffield Local Studies Library, can be used in conjunction with a local newspaper article (The Sheffield Daily Telegraph, 24 May 1865 p.4) which vividly describes Endcliffe Hall on its completion in May 1865 (when it was open briefly for public viewing prior to the Brown household moving in). Together, the sale plan and newspaper article (also available in the local studies library) allow us to build up a picture of the splendour of Endcliffe Hall. 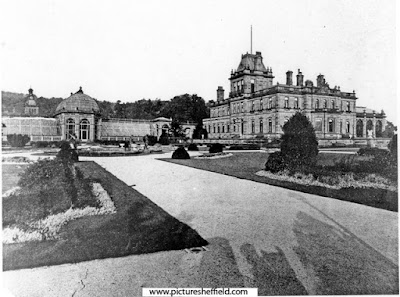 The newspaper article describes the property in glowing terms, noting, for example, how ‘even the servants have their bath-rooms and their main kitchen is really a palatial place’ whilst the sale plan includes floor plans of the home as well as ground plans and a detailed description of the property. Endcliffe Hall boasted 13 bedrooms (four of which had dressing rooms attached) whilst it was noted how ‘every provision is made in the way of hot and cold baths, and water-closets’. Other rooms inside the house (detailed in the sale plan) included a morning room, drawing room, dining room, library, conservatory, billiard room (in the tower), and a 60-foot long music saloon and picture gallery with an adjacent organ (for entertaining the family and guests). In addition to the servants’ hall and quarters, there was a butler’s pantry described as being advantageously positioned ‘in the centre of the house, and has the readiest possible communication with all parts of the establishment’. The ‘extensive cellaring’ included several cavernous wine cellars.


Endcliffe Hall was set in an extensive 33-acre estate and outside the main house there was a 160-foot long conservatory, a lodge house, greenhouses and glass houses for fruit growing (on the completion of the construction of the property, the ‘kitchen garden’ was reported as including ‘eight vineries and peach houses so arranged as to have a constant succession of fruit’), stables, a black-smith’s shop, a gardener’s house, piggeries and a laundry house.


The 1881 census reveals details of the full household of Endcliffe Hall at the time with the head of the house Sir John Brown (described as a ‘retired steel manufacturer’) living with his wife Lady Mary Brown and various servants (including a housekeeper, lady’s maid, housemaids, kitchen maids and a footman) with several gardeners and coachmen living in the adjacent lodge and cottages. 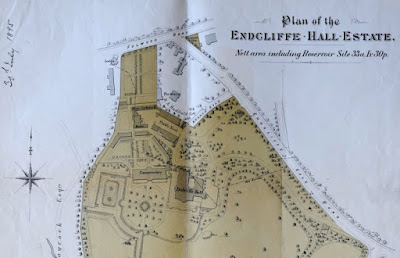 Brown (who was knighted in 1867 and who also formerly held the public offices of both Lord Mayor of Sheffield and Master Cutler) sold Endcliffe Hall for £26,000 in 1895 (resulting in this sale plan) to Barber Brothers and Wortley for building development (which ultimately failed to materialize). The hall was saved from demolition just before the First World War when it was acquired by the military and became the headquarters for the Hallamshire Rifles in January 1914. It remained as the Hallamshire’s base until the battalion was disbanded in 1968. Today, the hall and grounds are still in military ownership, now serving as a base for the Sheffield detachments of the 4th Battalion Yorkshire Regiment (TA Reserve) and the 212 (Yorkshire) Field Hospital. 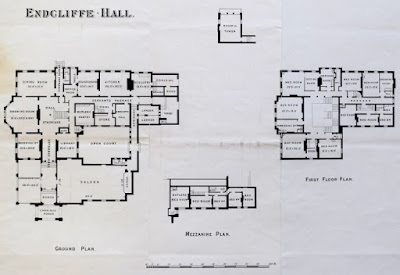 The Endcliffe Hall sale plan came to Sheffield Archives and Local Studies Library’s Conservation Unit earlier this year in a badly damaged state, with various torn sections and stained with much surface and ingrained dirt. Its fragile condition was exacerbated by previous unsuitable repairs (carried out many years ago without proper conservation care and expertise!) involving pressure sensitive tape and gummed paper. Preservation Assistant, Sarah Oliver (under the supervision of Conservator, Antony Oliver) first mechanically cleaned the plan with a dry chemical sponge then set about reversing the old repairs, removing the pressure sensitive tape with a hot tacking iron and getting rid of the residue with a crepe eraser. She then removed the gummed paper with a combination of water and methyl cellulose before repairing the numerous tears with Filmoplast Heatset Tissue.
The result is the fully restored sale plan pictured, returning the plan to something approaching the former glory of the house itself and crucially making the plan now suitable for handling/public consultation again and ultimately digitisation. Sheffield Archives and Local Studies Library are pleased to announce news of a programme to digitise many sale plans (such as this one) so they will soon be viewable online via Picture Sheffield: www.picturesheffield.com  Hundreds of sale plans for properties in Sheffield (including this one) have been catalogued by Alison Darby at Sheffield Local Studies Library and can be found by searching the local studies library’s online catalogue: https://www.sheffield.gov.uk/libraries/archives-and-local-studies/catalogues.html


The restored sale plan is just one example of hundreds of fragile and damaged items which the Conservation Unit conserve each year to ensure they are accessible to the public and safeguarded for future generations. As well as carrying out highly skilled conservation work on Sheffield Archives’ holdings dating back to the twelfth century (including conservation of paper and parchment documents, wax seals, maps and plans, bound volumes, photographs, etc.) the Conservation Unit is also able to carry out work for private customers. For more information see: https://www.sheffield.gov.uk/libraries/all-libraries/conservation-unit.html.
Pictured above: