In the latest in our series of guest blogs by MA student, Sophie Maxwell, she looks at some of the photographs in the archives which tell the story of 'Painted Fabrics', the company established 100 years ago to give employment to disabled ex-servicemen in Sheffield. 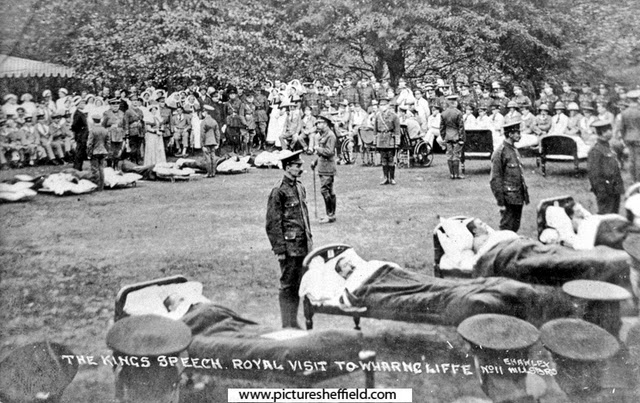 During the course of the First World War, combatants who suffered debilitating physical injury were frequently left unable to return to active service.  In Sheffield, the Wadsley Asylum became the Wharncliffe War Hospital, providing long-term care for many returning soldiers.


In 1915, a hospital volunteer named Annie Bindon Carter established afternoon painting classes for wounded soldiers.  An alumna of Sheffield School of Art, Bindon perceived the potentially therapeutic function of the classes, and hoped to assist in the recovery of men whose injuries left them both physically and emotionally debilitated.


The project’s initial success led Carter to conceive of a business plan involving her friends and patients.  The men began to use their new-found painting and stencilling skills in the creation of household goods such as tablecloths, doilies and curtains, continuing to work together after the war at new premises in West Bar.  As severe injury threatened many of the war wounded with unemployment and destitution, Carter’s enterprising scheme was a remarkable achievement. 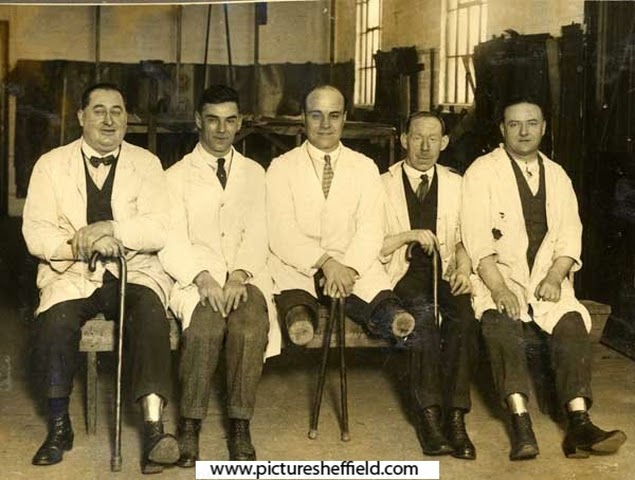 By 1923, the organisation had its name: Painted Fabrics Ltd. New premises at Norton Woodseats were substantial enough that many of the men and their families were able to live on-site, ensuring that the physical restrictions caused by their injuries inhibited life and work as little as possible.


Housed in the Sheffield Archives are a multitude of papers and images relating to Painted Fabrics, spanning the years 1915-1959, and including a large collection of press clippings relating to the company.  While looking through these documents, an album of photographs drew my attention. Featured within are photos and postcards depicting a variety of activities and events undertaken by the men at Painted Fabrics.  I was intrigued specifically by the original captions, which exhibit a strange combination of national pride and human vulnerability. 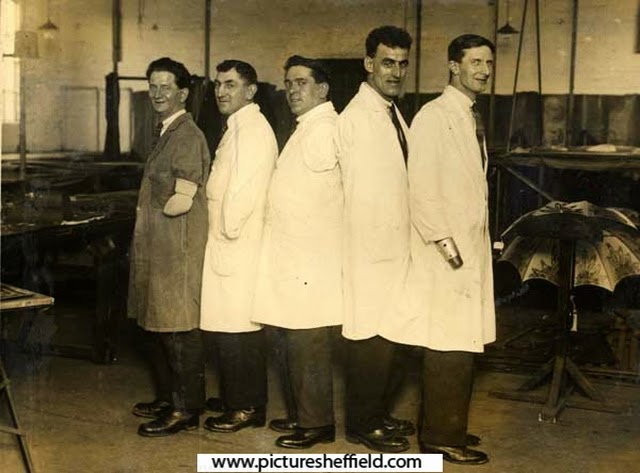 One image features five men in the Painted Fabrics workshop, standing side-on to the camera to emphasize the absence of some of their limbs. The caption reads, ‘each man has lost an arm and a leg and is still smiling!’


Looking at the photo, I felt humbled by the simple humanness of these men, whose untold experiences seemed so violently evident in the missing parts of their bodies.  I found myself peering at their shoes, trying to decipher which ones were concealing invisible prostheses.  My reaction to this photo was shared, it seems, with contemporary readers; suggested by the publicity approach taken on by Carter and her team.  One promotional leaflet declares boldly, ‘47 men with only 56 undamaged arms and 50 undamaged legs between them.’  This abjection of bodies is designed to shock and to intrigue, reactions that are no less instinctual close to a century later.


It strikes me as astonishingly bold and positive that these men, so at risk of dispossession and social alienation, were given an opportunity to take pride in the same injuries that might have rendered them unfit to work. I wondered if these images, with their strange captions, so evocative of a stiff-upper-lipped attitude, might not be perceived as exploitative, using the horrors of war as form of uncomfortable gimmick. 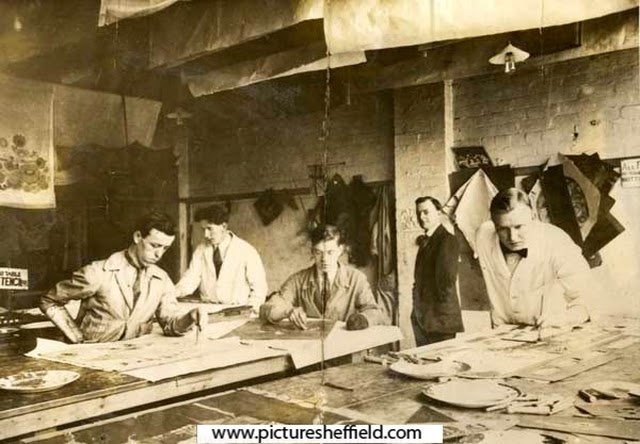 It is not horror, though, but pride, which emerges in these photographs, pride made all the more valuable in the context of human vulnerability.  It’s the same pride visible in photographs of present-day veterans like Noah Galloway, who last year graced the cover of Men’s Health Magazine.


Bearing witness to the success of these men in overcoming the unimaginable obstacles they faced was an experience I am grateful to have had.  The album shows the many sides of Painted Fabrics, including individual stories and state visits.  Family snapshots show the men in repose, at home or even, in one case, in a wedding photo (p. 46).  The album is about much more than a textiles company or a recovery program - something more like a family.
Sophie Maxwell
Photographs: King George V visiting Wharncliffe War Hospital (Wadsley Asylum, later Middlewood Hospital), 1915 (Picture Sheffield: s03504); employees of Painted Fabrics (Sheffield Archives: PF/4/2/4)