In the third of our guest blogs by MA student, Sophie Maxwell, she discovers a letter written by ‘Maggie’ of Highfield, Sheffield to her Aunt Ellen describing a night of terror during World War One in Sheffield… 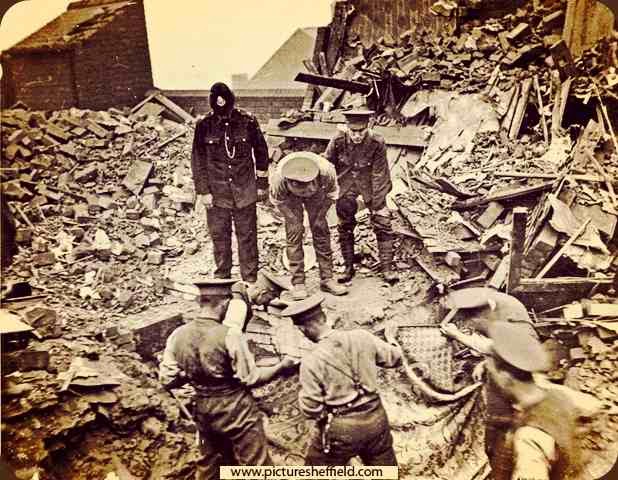 Sheffield’s history as a centre for industry brought with it certain responsibilities during the First World War, during which the city became a hub for the production of much-needed munitions for the war effort.
During the night of 25-26 September 1916, a Zeppelin air raid took place over Sheffield. The city’s role in providing the country with munitions suggests the Germans’ motive was tactical, although Zeppelins were unwieldy aircraft and its crewmembers may not have known their exact location.The raid caused an official estimate of 28 deaths and approximately 150 buildings were destroyed or damaged.

On 28 September, a woman named Margaret recorded her experience of the events in a letter to her aunt Ellen. The letter survives at Sheffield Archives.  Margaret’s letter is an extraordinary personal account of the direct experience of war at home.
‘Just a line to let you know we are still living, although we thought our number was up on Monday night.’
The overcast sky allowed the airship to approach with little attention from the ground. At around 10.30, the air raid alarm went off, signalling the Zeppelin’s approach.Although it was the only raid the city suffered during the War, there were a number of air raid warnings and many people believed Sheffield was unlikely to be attacked. 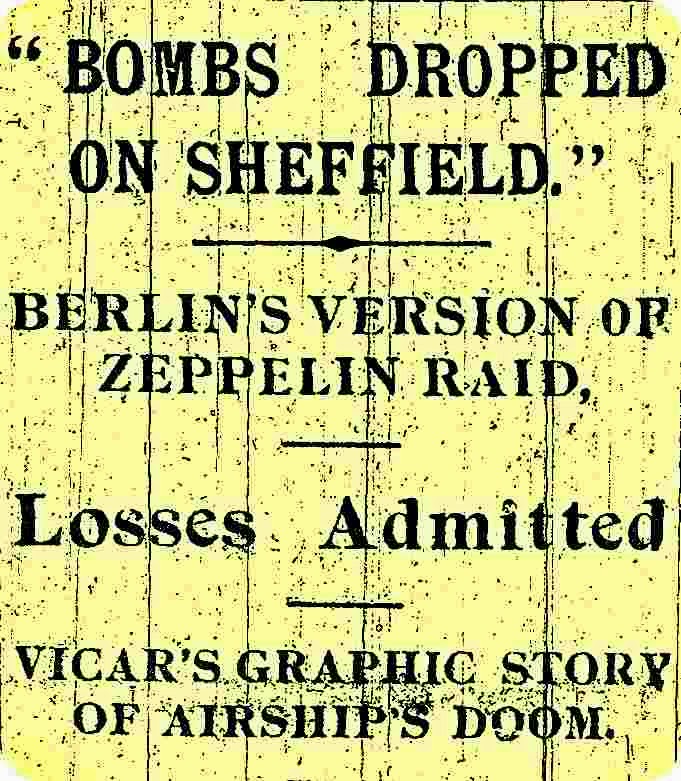 ‘the Sheffield people kept saying... they will never get here...’
Just after midnight on the 26th, the Zeppelin flew over Sheffield from the north, having travelled around the city from the south. At 12.25 it dropped its first of around 20 bombs, in the vicinity of Burngreave Cemetery.
'Suddenly we heard a droning, terrifying, sound overhead, which came stronger every minute.’
Attercliffe and the surrounding areas were home to many key industrial works in 1916, but the damage caused by the raid was suffered predominantly by domestic streets and houses. The steelworks avoided damage almost completely, and similar airship raids were equally indirect in their targets. Zeppelins were dubbed ‘Babykillers’ for their repeated attacks on civilians.
'Well we got our big coats out & sat at my bedroom window & about 12 o' clock we saw a great red flare go across the sky & a second later a terrific crash.then another. they were high explosive shells & they shook the earth. then anumber of pale green lights like lightning with terrible crashes after each one.they lit the whole sky up, they were incendiary bombs.'
The events Margaret describes are hard to imagine even as a modern reader inured to the horrors of war that we encounter daily through the media. The sight of the fiery bombs and the sound of the aircraft would have been juxtaposed with the empty, dark streets below as people waited in their homes, not knowing if this night was to be their last.

Margaret visited Attercliffe the following day and records that against all odds, a baby was found ‘alive & conscious’ in the rubble of a destroyed building on Princess Street. She writes that ‘the soldiers who found him cheered.’
The infamy of the Blitz during the Second World War has meant that earlier air raids are largely unremembered. Reading Margaret’s account of her memories is a sobering reminder of these horrific events that occurred on British soil, and of the sad futility of the attacks. Her tone throughout the letter is stoic and somewhat impassive, but towards the end she writes:

‘You must excuse the writing, as I am unnerved. We have not slept since it happened.’
Her admission of sleepless nights conveys the horror of her experiences with perhaps more depth than a verbal description of her feelings could have achieved.
The L-22 Zeppelin that bombed Sheffield was shot down on 14 May 1917 over the Netherlands with the loss of all crew members on board.