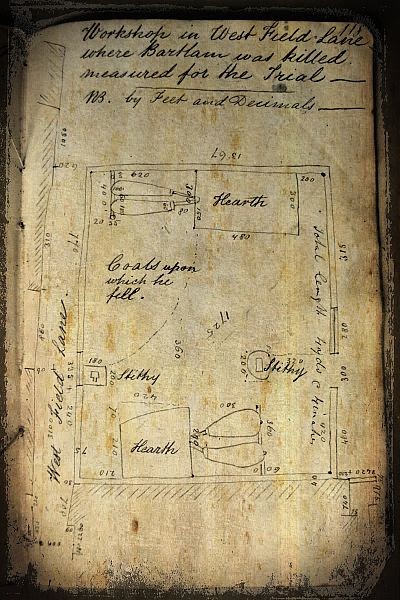 At Sheffield Archives and Local Studies Library, we are busy digitising card indexes and typescript catalogues to help researchers search for documents online.  One of our big projects is to improve access to the Fairbank Collection - a unique set of plans and field books created by the Fairbank family, who practised as surveyors in Sheffield from about 1736 to 1848.  While typing up index cards, an intriguing reference came to light mentioning a workshop in West Field Lane, which ran between Trippet Lane and West Street, ‘where Bartlam was killed’ around 1822.


The survey itself did not reveal how Bartlam died.  However, a court report was uncovered in the Yorkshire Gazette; on 22nd March 1823, Frederick Curtis stood trial for the manslaughter of fellow cutler John Bartlam. The report stated that ‘some interesting circumstances came out of the trial, and the jury acquitted the prisoner’.
A detailed report dated 29th March 1822 in the Sheffield Independent, revealed that there had been a dispute over the ownership of some tools which led to a fight between Curtis and Bartlam. The only witness to the fight, a Mr Siddall, claimed that Curtis had attempted to throw Bartlam out of a window, but Siddall’s honesty was questioned by the defence, who revealed he was a convicted felon himself, having served time for the theft of a leg of mutton twenty years previously.  Surgeons who examined Bartlam’s body after his death were unable to decide whether the internal injuries from which he died were caused by ‘cold, previous complaint of the bowels, or violence’.  Several witnesses who knew both the deceased and accused attested that Bartlam was ‘a very irritable and provoking fellow' while the prisoner was 'a quiet, inoffensive, humane man’.  The judge, clearly frustrated by the inconclusive evidence, stated that there was ‘a deal of perjury in this case, either on one side or the other, so the Jury would decide which was worthy of credit’.  The jury promptly acquitted Frederick Curtis, who appears on the 1841 census as living with his wife and children on Furnival Street, still working in the cutlery trade.