The Imprisonment of Mary Queen of Scots

In 1568 and following her forced abdication, Mary Queen of Scots fled Scotland and sought refuge in England with her cousin Elizabeth I.  However, Mary had been raised as a Catholic and since she also had a claim to the English throne, was considered a threat to Protestant Elizabeth.  Upon arrival, she was taken prisoner and subsequently kept under surveillance for the next 19 years.

It is less widely known that 14 years of Mary’s imprisonment was spent in Sheffield.  Under the care of George Talbot, sixth Earl of Shrewsbury, she was regularly moved between the relatively luxurious Manor Lodge and the aging Sheffield Castle.  Two of her letters written during her time in Sheffield are now kept at the City Archives. 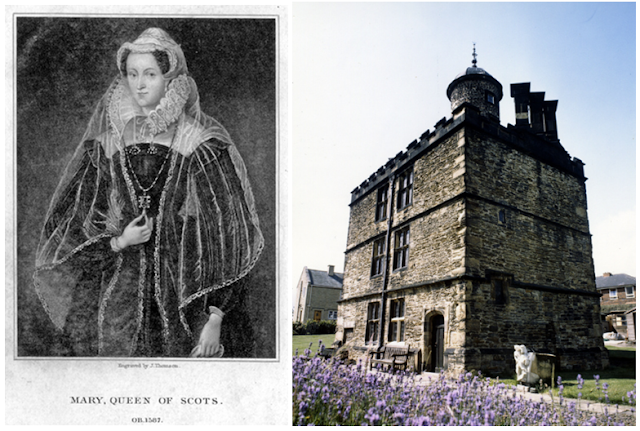 An engraving showing Mary Queen of Scots, alongside an image of the Turret Lodge, Sheffield Manor Lodge, off Manor Lane.  It was said to have been erected by the Earl of Shrewsbury as a place of greater safety in which to keep Mary prisoner. It was restored in the late Nineteenth Century.

Throughout Mary’s imprisonment she remained a focus of Catholic plots to depose Elizabeth.  In 1586 her correspondence with conspirator Anthony Babington was intercepted by spies and eventually convinced of Mary’s real and ongoing threat, Elizabeth I signed her death warrant.  Mary was executed on the 8th February 1587. 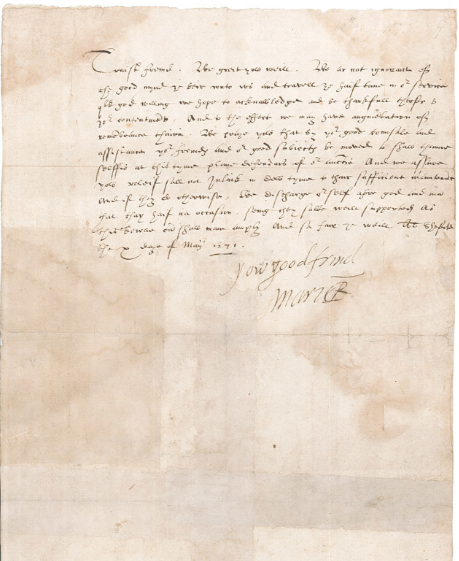 Shown above is a signed letter from 1571, sent by Mary to the Laird of Barnbarrock during her time in Sheffield.  It is held at the City Archives.  It reads,

Truest friend. We greet you well.

We are not ignorant of the good intentions you bear towards us and the exertions you have undertaken in our service which, God willing, we hope to acknowledge and to give you such thanks as will content you. And so that we may have the more to remember, we pray you to use your good counsel and assistance to make your friends and our subjects show themselves plainly as defenders of our authority at this time, and we assure you that help for them shall not be lacking in due time; and if they take any other course, we acquit ourselves before God and man of giving them any occasion to do so, seeing that they will be well supported, as the bearer of this can show more fully.